Average rating: 3 (2 votes)
Please, register or log in to rate this game! 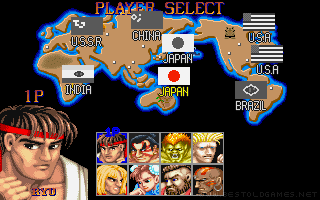 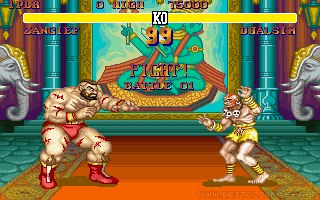 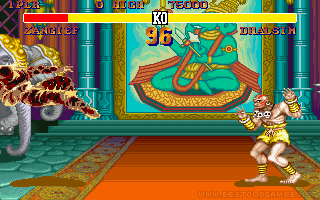 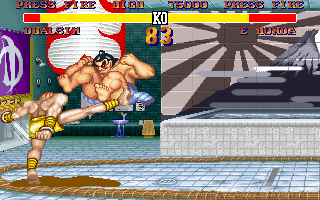 The gaming world is very differnt from the filming - one significantly example is how successful the sequels are. While in movies sequels tends to be more boring and less successful, in the gaming industry it seems (to me), that the sequels are often more successful and better than the first game (e.g.: Prehistorik 2, Dune 2, Settlers 2, Half-Life 2, etc.). One of the most successful sequel is Street Fighter 2, whose first part is known only thanks to this continuation. Street Fighter is fighting game Mortal Kombat style, where you can choose from eight characters: Ryu, Ken, Blanka, E. Honda, Zangief, Chun Li, Guile and Dhalsim. Then you have to fight the rest of them. If you can manage to beat the remaining seven characters, you go into the fights with four main bosses: M. Bison, Vega, Sagat and Balrog. Each of the participants of the tournament has it's own story and come from a different country. Each one of them has a different reason, why to participate and win the tournament. There is also a movie inspired by this game, but it has not been very successful.