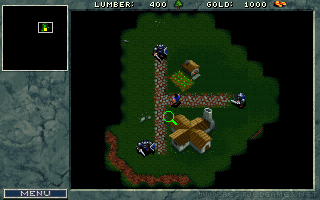 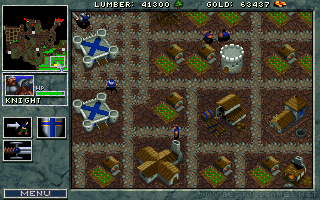 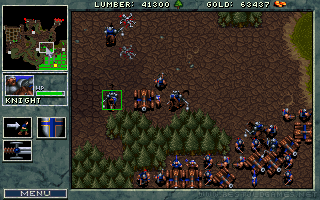 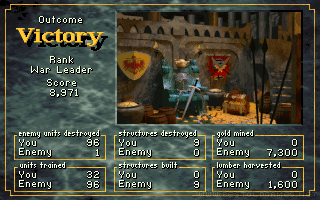 The human kingdom of Azeroth had a pretty quiet life. People were happy, trade blossomed, so until hordes of large, green, muscular, smelly Orcs came, trying to gain territory for themselves. Campaign is divided into two, you can play for either Orcs, or Humans. Both campaigns are almost identical, with only minor differences (you will see). Game system is basically the same as it was in Dune 2. You have to collect the raw material (in this case wood and gold), produce units to defend the base, attack the opponent and eventually try to destroy him. Graphics is absolutely perfect and at that time it was absolutely stunning. Dark environments, muddy swamps, gorgeous green meadows, blue rivers and lakes beautifully counterstained final atmosphere. Classic Warcraft.

Warcraft is a nostalgia in itself because it was the second Realtime - Strategy (the first was Dune2), and the FIRST real-strategy taking place in the Dark Ages, where honor and devotion were "numero uno" for every true fighter.

What is all about Warcraft about?
The human kingdom of Azeroth lived a very peaceful life. The people were happy, the business flourished, until those who came from hordes of large, green, muscular, stinking orcs, trying to gain territory for themselves.

The campaign is divided into two, the Orcish and the human. Both campaigns are almost identical with small differences that you will encounter yourself while playing.

The game system is essentially the same as Dune2. You must collect resources (in this case wood and gold), produce units to defend the base, attack the opponent and finally try to eliminate it. Such a new diversification is the possibility of upgrading the weapons and armor of your warriors and buying new stronger spells for your magicians :) (until it rhymes). The so-called Rescue mission where you have to save some important NPCs from the cave with a limited number of fighters and then take it out safely. There is also an option to mark up to 4 fighters at once, so you don't have to click each one separately.

The graphics look quite bombed at the time because she's bombed. Dark dark colors of the environment, muddy swamps, beautiful green meadows, blue rivers and lakes beautifully complete the final atmosphere. The characters are also quite nicely drawn and their animations are quite successful. The music and effects were groundbreaking at the time, and I have to say that when I heard the "We are under atack" speaker after buying my sound card! I almost flew out of my chair :).

Another plus for this game was clearly Multiplayer, which could only be played by Serial Cable, but for that time it was a pretty good leap forward, and of course the possibility of playing on randomly generated maps.

As for the individual races, it's a little worse. Apart from the graphic side, the two nations are, on the other hand, the same, and they differ only in magic, otherwise everything else is the same, only it looks different.

Verdict: An incredible, original, graphically fascinating game with amazing sound, but most of all playable.