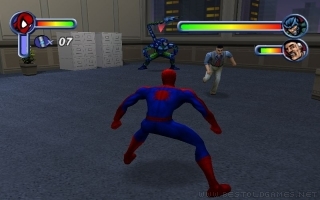 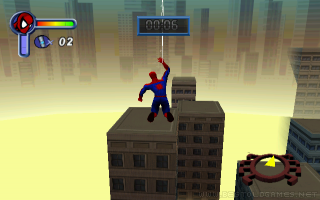 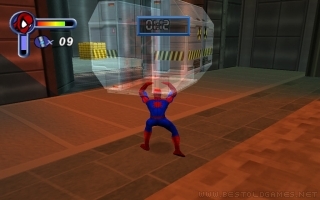 The Spider-Man game from 2001 is the first part of a series of games about a spider man. Spider-Man made its premiere in 2000 on the PlayStation console, where it was a great success and was ported to Windows and Mac. The story begins when Peter Parker attends a science project by Otto Gunther Octavius, which is later stolen from a fake Spider-Man double. So Peter Parker aka the real Spider-Man sets out to pursue the kidnapper and clear his name. He will also be helped on his way by the mysterious Black Cat. After meeting Black Cat and foiling a bank robbery by the Jade Syndicate, Spider-Man is forced to save J. Jonah Jameson from the Scorpion. He defeats Scorpion only to have the ungrateful Jameson call the police. While trying to escape, Spider-Man meets Daredevil, who promises to spread information about Spider-Man's innocence. After avoiding a police helicopter, Spider-Man meets Black Cat, who informs him of two new problems: Rhino attacks the power plant, and Venom kidnaps his wife, Mary Jane Parker, to lure Spider-Man. Spider-Man and Black Cat, who decided to deal with Rhin first, defeated him and left him with the police, but the one who was severely wounded during the fight was abducted by unknown assailants who pretended to be medics. The rest will be revealed to you by the game itself.