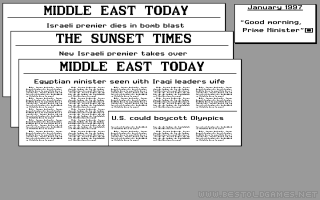 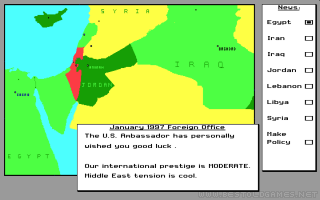 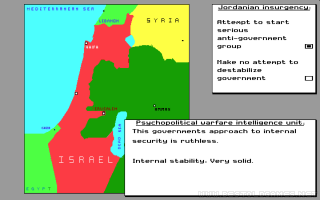 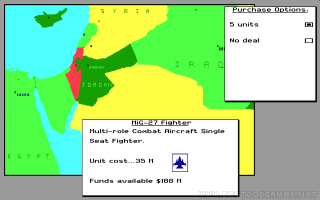 The 1990's turn-based strategy is based on the ongoing conflict in the Middle East, but it is set in the future compared to the year of its launch, in 1997, when the future Israeli Prime Minister was killed by a bomb placed by Palestinian terrorists. Graphically, the game resembles a war game, but in reality it is a much more global strategy, where diplomacy plays a much more important role than military action. The international situation is tense and you should make every effort to maintain peace in your country and at the same time, seek a peace treaty with Palestine and the Arab countries that support it. The gameplay is quite extensive, although the game, for example, does not solve the country's economy much. You will spend most of your time researching, spying, buying weapons, "nuclear racing" (to procure missiles ourselves and prevent them from being acquired by any Arab country), etc. The game has a huge potential hidden in it, because each of your decisions can radically change the next story of the whole game, so you can play several times and experiment with your decisions. This is a very good political simulator, which focused on an insufficiently processed topic in games.

Crisis in the Kremlin