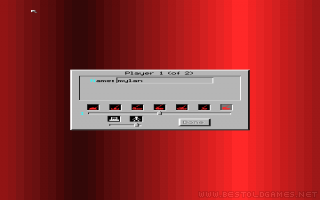 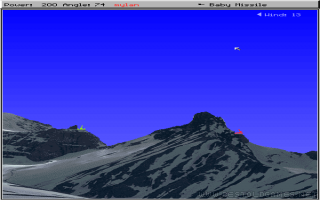 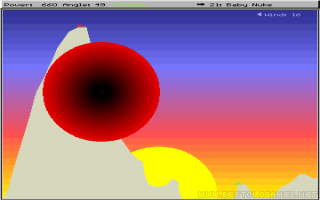 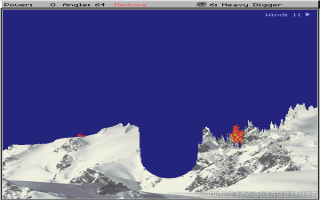 Scorched Earth is by design very simple game that can be considered a forerunner of later and more famous series of Worms. As you might guess, this game is all about the total destruction of all opponents, whichcan be tough, you can have up to 9 of them at the same time (either you friends or computer opponents). At the beginning there are all kinds of possibilities to adjust the game settings. It is worth mentioning you can modify weather (wind, effects,...), physics (gravity,...) and finances. The following is the distribution of players, each can choose one of seven possible tanks (two are only bunkers, so they can not move) when playing against the CPU, you can choose from eight levels of difficulty. Finally we come to the arsenal of weapons in the game there are over 30 of them, roughly half of them are destructive and half are strategic (rather to adjust enviroment, or a defensive weapons).

Scorched Earth, a very simple game that can be considered the forerunner of the newer and more well-known Worms series. So, as you probably already guess, this game is nothing more than the total elimination of all opponents, who can face up to 9 (whether live or computer opponents).

At the beginning you will find a number of options for how to adjust the game to your image. It is worth mentioning, for example, adjusting the weather (wind, influences, ...), physics (gravity, ...) or finance. choose one of seven possible tanks (two are just bunkers so they can't move), you can choose from eight difficulties when playing against the CPU.

Finally, we get to the arsenal of weapons, there are over 30 of them in the game, about half of them are destructive (there is probably nothing to add here) and half strategic (rather for landscaping-digging a path or creating a defensive wall). You still have a range of defensive equipment, of which there are just over ten, but such a shield or parachute will certainly find use in you. But nothing is free, so everything will mainly depend on your current financial situation. Your only source of money, I do not count- If you start capital, your strategic skill will be in combat, so the better you are, the more money you will receive.

And here it is, now everything is ready for the slaughterhouse. The players take turns after the move and it's nothing else to take down your opponents before they do the same to you. So just drop the shield and start beating, your tank will last hit without a shield, but there is no glory. In addition, with each damage, your firepower decreases, even to the extent that the only place you will be able to hit is yourself, but if you want to play the tough without a shield, as is honored. But remember that when aiming and determining the force of the projectile, you must take into account, in addition to distance, the wind, which behaves according to your previous settings.

+/− The game can destroy a long-standing friendship in a few minutes, but that's really extreme, otherwise in this game more people will definitely not be in need of fun.