BestOldGames.net » Action games » Prince of Persia 2: The Shadow & The Flame

Prince of Persia 2: The Shadow & The Flame 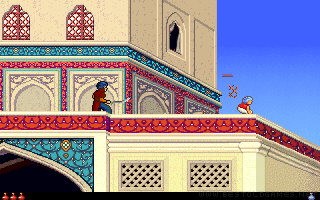 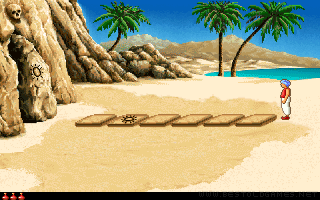 First game Prince of Persia was a huge hit so it's now wonder there is a sequel: Prince of Persia 2: The Shadow & The Flame. First thing you will notice is a more beautiful and colorful graphics that made certainly ​​great progress. Beautiful and new animated characters, backgrounds, and many of the locations makes this game really nice. Developers from Broderbund Software created a very nice music theme, which is a welcome change and at least for me the whole prince is more individual and you can feel the spirit of the Orient there. Gameplay is very similar to the first part, except for the possibility of save (which is really necessary this time, because game is much larger and longer than the first one) and manually towing a sword in combat. The game is divided into 15 levels and as you are gonna see in intro, locations in the game vary a lot and are they are very nicely done. You will find yourself in the market, by the sea, in a cave in and palaces, ride the horse, flew on a flying carpet and you'll be able to fight against new opponents and new pitfalls. Although in some respects Prince of Persia 2 surpass his older brother, according to many, the first part remains unbeaten. That does not mean that you should forget about Prince of Persia 2,no... you should play it, because it's still a lots of fun.

Nowadays, you have the opportunity to play new parts of the Prince in full 3D graphics and however effects. That is why I am glad that you are reading these lines and that we will look together at the tooth of their older brother from 1993.
After the first multi-successful work of the Prince, his second sequel came next. First of all, you will definitely notice more beautiful and colorful graphics, which have certainly made great progress. We will talk more about this in more beautiful and new animations of characters, backgrounds and many locations. The developers at Broderbund Software have also served us music to play, which is a welcome change. In this way, at least for me, the whole prince is more special and the spirit of the Orient can be felt a little more here. Well, hurry up, let's take this piece apart.

The principle of playability from the first part has hardly changed at all, except for the possibility of sewing positions (due to the playability time it is necessary) and manual drawing of the sword during combat, which I hope you can easily swallow. There are several nice hours of playing waiting for us, divided into 15 levels, so get ready for it. As I indicated in the introduction, there are quite a few locations in the game and they are nicely graphically managed. You will find yourself in a market, by the sea, in a cave, in the city and in palaces. You will ride a horse, fly on a flying carpet and you will have the opportunity to fight new opponents and new traps. I will mention at least a few innovations in the form of snakes (one bite and amen), lava pits (these are better to skip), various knives and stepping traps.

The controls are practically identical, but the prince has learned to crawl and turn around in combat. What sometimes caused me some problems was the right timing of the jump, but I believe it's my left, because I had the same problem in the first part. Other possible sourdoughs are e.g. at the bridge with the skeleton in the 5th level, where you really need to have a dose of patience. But what if, games are like that. You will also come across bottles as health supplements here. Again, big red drinks will complete all your lives, small ones lost. Blue takes one and green is less of a risk.

So what to add at the end? Although in some respects the Prince of Persia 2 surpasses his older brother, in many opinions the first part is unsurpassed. But that doesn't mean the sequel to The Shadow & The Flame should go unnoticed. Go for it, the only thing I can recommend is, download and play, because the series of these games has literally become a legend.