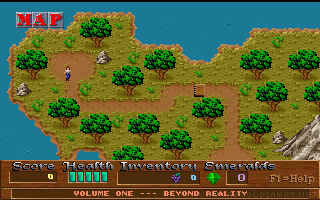 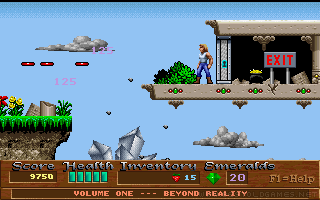 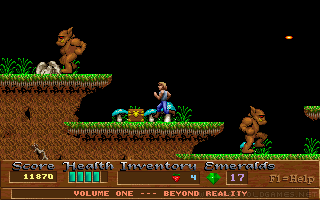 Malvineous Haversham is an archaeologist who studies Madagascar's ruins, remains of long-forgotten, mysterious civilization known as the Blue Builders. One day he fainted and wakes up in a very strange, hostile world. Everything here is trying to attack him and even kill him. And this is precisly the part, where you start playing Xargon. It is a very nice, classic 2D side-scrolling platform game where you have to fight enemies, collect keys, shoot your weapons and improve them overtime. If you remember the game Jill of the Jungle, this game is very similar, but unlike in Jill of the Jungle, you won't control a female character. You have to collect many things during the gameplay, some of them are neccesary to move to the next round and some of them you can leave behind - such as diamonds. Even if you can leave them, I recommend to collect as many diamonds as possible, because diamonds are game currecy in the store. You can enter the store any time during the gameplay and buy a variety of improvements (more health units, weapons upgrades, etc.). The goal is, as always, to defeat enemies, survive and eventually overcome the tyrant, who rules this strange world - Xargon. In 2008 the entire game was made available as freeware.

Jill of the Jungle

Jill of the Jungle 2

Jill of the Jungle 3