Putt-Putt Goes to the Moon 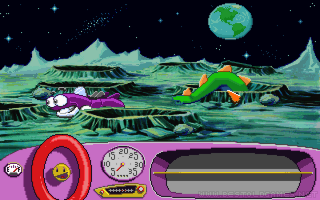 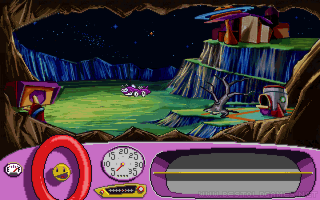 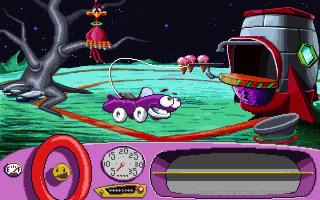 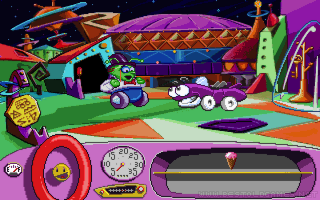 Putt-Putt Goes to the Moon is a point and click adventure made for a younger audience. The game was released in 1993 by Humongous Entertainment and was followed with many sequels. Like many other games created by Humongous, simple words, logic, and memory puzzles were incorporated into the game's numerous puzzles. The game begins with Putt-Putt and his dog, Pep, heading to the fireworks factory after receiving an invitation from Mr. Firebird. Mr. Firebird warns Putt-Putt not to touch the lever marked "Do not touch," but a series of unlikely events follow causing the lever to be thrown.

After landing Putt-Putt manages to prove that there is gravity on the moon by falling off a bridge and into a river of green slime. Before his approaching death Putt-Putt is miraculously saved by a lunar rover, named Rover. Exchanging thanks, Putt-Putt is saddened to find that Rover was left behind on the last moon landing and now desperately yearns to go home to Earth. This encourages Putt-Putt to avoid any further shenanigans and find a way home quickly. He soon encounters a alien who is willing to exchange his hollowed rocket shell for a mere 10 glowing moon crystals. Putt-Putt is then informed that he must collect several other parts to get the rocket running; space fuel, a key, nose cone, and a steering wheel.