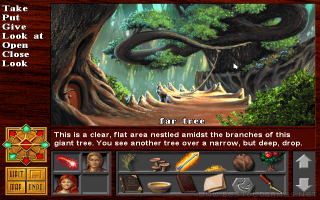 2000 years ago, an advanced race known as the Sartan divided the world into five regions. Humans, dwarves, and elves were to inhabit 4 of these worlds named after the four elements. The Patryn race was sent into exile in the deadly Labyrinth. After these 2,000 years, some of Patryn have found their way through the Labyrinth. The main protagonist is a young Patryn named Haplo, and his task, entrusted to him by Lord Xar, is to get through the Gate of Death to each of the other worlds and find pieces of the seal there. Once assembled, the Patryns will be allowed to reconstruct the planet and take revenge on the Sartans. Death Gate is an adventure game that uses a first-person view and contains a huge amount of text and interaction. The game is controlled using word commands that can be entered with the mouse. There are a large number of dialogues in the game, in which there are often several answers to choose from. The protagonist also has the opportunity to cast spells.

The Legend of Kyrandia