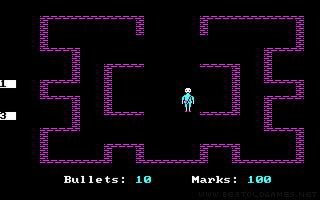 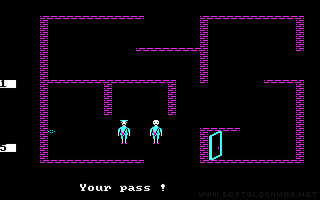 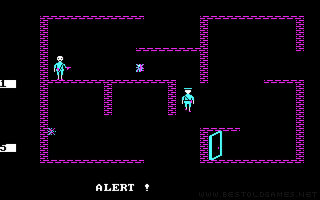 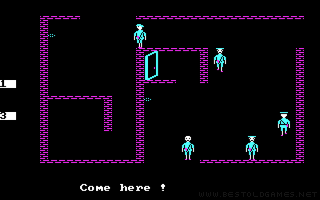 The sequel to Castle Wolfenstein is in the same spirit as the first part. In the 2D view, you try to secretly infiltrate the Nazi headquarters and avoid the guards instead of shooting, which can trigger an alarm. The object of the game is to place an explosive in front of Hitler's bunker and escape the same way you came from before the explosive explodes. The game features a top-down view of each room on the level, though the characters are seen upright like in a side-scroller. The player tries to traverse the levels by sneaking by, impersonating and sometimes killing opponents. The game is controlled via a joystick, paddles, or the keyboard, although the keyboard is the only option that allows for all commands. The player successfully completes the game after planting the bomb and escaping the bunker before it explodes. The game is similar to its predecessor, but features a number of gameplay updates. The guards now use a pass system, in which the player is periodically summoned by guards and asked to show the correct pass (which varies by floor), or offer a bribe. If an incorrect pass is shown or the bribe is rejected due to the lack of money (for a total of two times), the guard will attempt to activate a bunker-wide alarm or kill the player.The bodies of dead guards can be dragged through the room to conceal them, block passages, or gain access to objects.The highly explosive grenades of the previous game have been replaced with a dagger, which can be used to silently kill guards instead of attracting attention with gunfire.